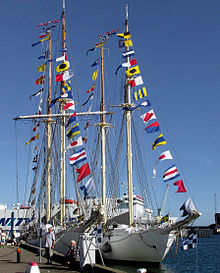 International maritime signal flags refers to various flags used to communicate with ships. The principal system of flags and associated codes is the International Code of Signals.[1] Various navies have flag systems with additional flags and codes, and other flags are used in special uses, or have historical significance.[2]

There are various methods by which the flags can be used as signals: